Reflections on being an undergraduat​e in my seventies

In July, just one month before my seventy-third birthday, I heard that I’d been awarded my BA in History from Birkbeck, University of London. A ‘second-class upper division’ (or 2.1) to be precise. So, my student career is over. I can honestly say that I’ve thoroughly enjoyed the experience and met many really interesting people of all ages who have come from many countries to teach or learn in London. How lucky we are to live so close to such a dynamic, cosmopolitan city.

Of course, the whole learning process was disrupted by Covid. In March 2020, towards the end of my second year, teaching moved online, and stayed that way until the end of my third and final year. I know that the teaching staff moved heaven and earth to make the process of mass online learning as fruitful as they could, but it’s just not the same from the student perspective. Online learning is a solitary experience. The main thing that you miss is chatting with fellow students before and after the lecture. From the teachers’ perspective, it must be even more frustrating as the teacher has so few body language clues about how his or her message is getting across. In theory, this year’s graduates should be attending a graduation ceremony in November, but we don’t know whether that too will be forced online. I will be really disappointed if it is.

In the first year of the course, students choose to study history by period, and there are nine periods to choose from, from classical times to the twentieth century, I chose to study three periods of world history covering from 1500 to the present day. My main interest is twentieth-century history, but I also thoroughly enjoyed learning about the early modern world (from 1500 to 1789), which is of course the period when Europeans first encountered other civilisations. Spaghetti Bolognese is a quintessentially European staple, but what would it taste like without pasta - from China - or tomatoes and chilli peppers - from the Americas - or basil - from Africa? What would be left on the plate?

In return for the indigenous Americans introducing us Europeans to tomatoes, peppers, potatoes, maize, and a whole host of other food staples, we gave them horses, which they found quite useful; but we also introduced them to measles and influenza, which may have killed more than forty million of them. If that wasn’t enough, we then sent thirteen million Africans to the Americas to be enslaved, but several million of them never arrived on American shores, because the journey was so dangerous. So much modern history is about slavery and genocide that it was a great relief to choose, as one of my second-year modules, a course called ‘Being Good in the Modern Age’ which is history of altruism and morality. This course began by examining why the Enlightenment philosophers considered kindness and politeness to be important, and went on to cover, inter-alia, the campaign to abolish slavery, the campaigns of the nineteenth century feminists, and, from the twentieth century, the disability rights movement, environmentalism, and the United Nations Universal Declaration of Human Rights. I think that if I had to choose the course that I enjoyed the most, it would be this one.

In the third and final year I wrote my dissertation. Those of you that are already familiar with my blog  will know that one of my interests is disability rights, and that I have written the life stories of my parents, both of whom were disabled by polio as young children. So, you won’t be surprised at my choice of research project, which was a study of the foundation of the British Polio Fellowship in 1939 and its work between 1939 and 1970. This charity was a self-help movement which in many ways was years ahead of its time; as most charities with this kind of ethos did not emerge until the 1960s. Writing a dissertation during various stages of lockdown is not to be recommended; the library that holds most of the relevant material for a dissertation about polio is the Wellcome Library in Central London, but at no point when I was working on this project was this library open to new readers. Other students will have had similar problems, so I guess we’re all in the same boat. Anyway, these are trivial problems compared to what many other people have had to endure during the pandemic. At least it was my final year of university that was disrupted. I feel a lot of sympathy for those eighteen-year-olds who had to endure the stress of the 2020 A-level examinations fiasco, and then go into a university hall of residence to be solely taught online. They deserved better, and it’s not the fault of the colleges that things weren’t better for them.

The question that I’m asked most often is what next? Am I interested in a master’s degree? I have to say that the answer is no. There is no government funding for the over -sixties to go further, and while there are scholarships, I think that there are many younger people who deserve them more than I do. I will carry on writing and start to update my seriously unloved and dated blog more often, starting now. But would I recommend going to Uni to other seventy-somethings. You bet I would!

The Paralympics really have come home! A very personal view

Full stadiums, cheering crowds and an opening ceremony that was watched by over eight million people. Over 600 hours of Paralympic activity broadcast on free-to-air TV and a very good medal table for GB. The fact that the games have returned to the country where they were invented has, I’m sure, contributed a great deal to their success.

Here are some thoughts about what I’ve seen on TV, saw in person at the Olympic Stadium last Friday and, to make it personal, some para-sports related family memoirs.

It was always going to be tough job to produce an exhilarating opening ceremony because the whole nation has already seen two Olympic ceremonies in about a month. In addition, a large part of the three hour program is taken up by processions, speeches and flag raising, which are not in themselves riveting viewing.

But the production team, headed by Jenny Sealey and Bradley Hemmings exceeded all expectations. They began by introducing the audience to Professor Stephen Hawking, probably the most famous living disabled person. The cast of over three thousand volunteers, headed by Hawking himself, with Ian McKellen as Prospero, and disabled actor  Nicola Miles-Wildin as Miranda celebrated science, literature, athleticism and human rights using words from both Hawking and Shakespeare’s ‘The Tempest’.

Cast members with disabilities, including Tanni Grey-Thompson flew from the high wires and the Paralympic flame was carried into the stadium  from the Orbit on a zip wire by 2016 paralympic hopeful Joe Townshend, a 24 year old ex-marine who lost both legs in Afghanistan. The production team used all the facilities of the massive stadium to produce a thrilling piece of physical theatre. The Olympic cauldron was lit by Margaret Maughan who won GB’s first ever paralympic medal in Rome in1960; one year after she broke her back in a road accident. Margaret Maughan was treated by Ludwig Guttmann, and I think that is fitting that the cauldron was lit by somebody who remembers the movement’s founder.

The highlight for me was John Kelly and the cast of “Reasons to be Cheerful” singing Ian Dury’s “Spasticus Autisticus” anthem that was originally written for the International Year of the Disabled in 1981, and which was, at the time, banned from the airwaves by the BBC because the word Spastic (traditionally a term to describe sufferers of cerebral palsy) was becoming taboo in Britain, due to its increasing use as an insult. The BBC did not trust the public to understand Dury’s sense of irony.

Spasticus Autisticus is of course a protest song, and this, together with Miranda’s shattering of the glass ceiling was large part of the human rights theme of the ceremony.

Our visit to theGames – Friday 31 August

Marilyn and I went to the evening athletics session on Friday. We were fortunate enough to see an iconic moment - Hannah Cockroft win GB’s first track gold medal in the T34 100 metres race. From high up on level two I managed to get a fairly decent picture of Hannah and the runners-up celebrating. We were thrilled at the spectacle of the full stadium and the cheering crowds. 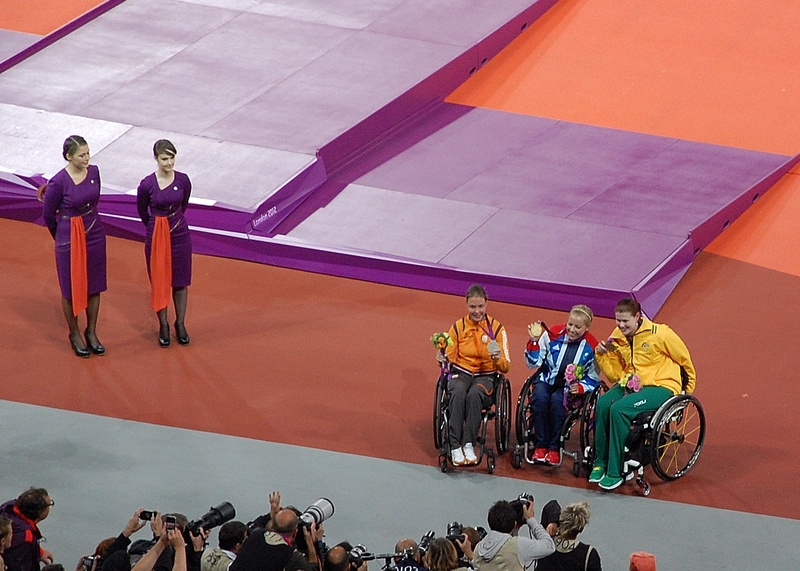 The Paralympic games have moved on so much since Atlanta sixteen years ago. Yesterday I posted something about the current games on the Polio History Facebook page, and got these comments from Kathy Gregory Davies, who was a member of the GB basketball team in Atlanta. Kathy wrote:

In Atlanta, the organisers had only 3% of the budget left after the Olympics. They were selling off furniture etc in the accommodation to make up the shortfall.Some of the teams had no blankets, microwaves were gone, one of the food halls was closed down, though they had to re-open it. One American offered my team accommodation in his hotel when he heard how bad it was. Luckily, we had a good psychologist with us: btw, we stayed with the rest of the Brits, but thanked the hotelier for his offer.

A personal memoir –My Mum, Ludwig Guttmann and Ian Dury

I’ve always known who Ludwig Guttmann is, ever since I was a child. That’s because my mum, Kathy Bradford, often talked about him. Even though she was not a particularly sporty person, way back in the 1950s and1960s she know about the work that he was doing to enable people like her to excel.

But Kathy died in 1995, and I must admit that I’d forgotten thatI knew anything about Guttmann until the run-up to the games. I’m quite pleased that I knew of what he was doing so many years before he belatedly became a knight of the realm and the subject of a TV docu-drama.

Ludwig Guttmann may have been one of Kathy’s heroes but Ian Dury was certainly not a hero to her. She was scandalised by the very thought of a song being titled “Spasticus Autisticus”, which made her one of the people whom the BBC wished to protect. But in 1981 she was almost seventy years old, and that explains a lot of her dislike of Ian Dury. She loved pop and rock but she much preferred Wham, the Beatles and Patsy Cline. She wasn’t that keen on the Stones or Bob Dylan either. I don’t think that she ever heard “Spasticus” because it wasn’t played on the radio, and she certainly wasn’t going to buy it and lend it her support. I could have lent her my copy of Ian’s “New Boots and Panties” album but I don’t think that she would have approved of the opening lines of “Plaistow Patricia”. You can look up what those lines are here – I’m also conscious that some of the readersof this blog may be offended if I print them.

Kathy would be 100 years old this year. I think that if she’d lived to see John Kelly, Nadia Albina and Garry Robson belting out the lyrics to Spasticus at the opening ceremony, and seen thousands and thousands of people supporting the paralympians, she would have got the joke and would have promoted Ian  - as well as John, Nadia and Garry - to hero status.