One Year On: The Olympic Park Revisited

This time last year I wrote a number of blog essays on the subject of the Paralympics, the final one expressed three hopes for the future:

Last weekend (26 to 28 July) saw the first athletics and para-athletics events in the Olympic Stadium since last summer, as well as the Open East Festival in part of the Olympic Park. On Monday a substantial part of the park was re-opened to the public for the first time. So this is the right time for an update how well we are doing in these three challenges. Let's take them one-by-one:

Rio must continue what London began.

I was referring to the fact that London 2012 was the first time that para-sports had sold out large stadiums, attracted sponsorship and mainstream TV coverage, and was asking whether this could be maintained?

So far, it's looking good. The week before the London Events saw the staging of the International Paralympic Committee's Athletics world championship in Lyon, France. 1300 athletes from 94 countries competed, French mainstream TV (which had been widely criticised for giving inadequate coverage in 2012) gave it 2 hours of coverage each evening; while in the UK Channel 4's More 4 affiliate provided 5 hours of live coverage each day.

GB came sixth in the medal table winning 11 golds, ahead of China but behind, among others, Brazil who won 16 golds. I think it's important that the next host country is doing well at this stage - if they weren't I'd be pessimistic. In Alan Oliveira Brazil has a potential iconic figure who could become the face of both the next Olympics and Paralympics, and that's very encouraging.

My party had tickets to the Open East Festival in the Olympic Park (more about that later) so we were thrilled to see things on the big screen. We watched Hannah Cockcroft easily win the T33/T34 100 metres event, David Weir win another victory as he clocked a time of 3:16.40 minutes to win the mile, and the thrilling T43/T44 100 metres race that saw both Alan Oliveira and the USA's Richard Browne break world records, and our own Jonnie Peacock take the 'bronze position.

So I think that the future for participation and coverage of para sporting events still looks very bright.

The Olympic park legacy must be to provide homes, jobs and recreation for the people of East London.

Well the Open East Festival was a definite hit with me on the culture and recreation front. Tickets for each day were only £9.50 and the vent was packed with people of all ages and ethnicities. On Saturday there was a wealth of World Music; headline artists included Vieux Farka Touré - son of the late, great Malian guitarist Ali Farka Touré - as well as Malian superstars Amadou & Mariam. We went on Sunday and the highlights for me were the acrobats Una Via Aerial Circus, a walkabout by Joey, the horse from the National Theatre's War Horse play, and The brilliant Graeae Theatre Company's staging of Ted Hughes's "Iron Man" Here are some of the pictures we took: 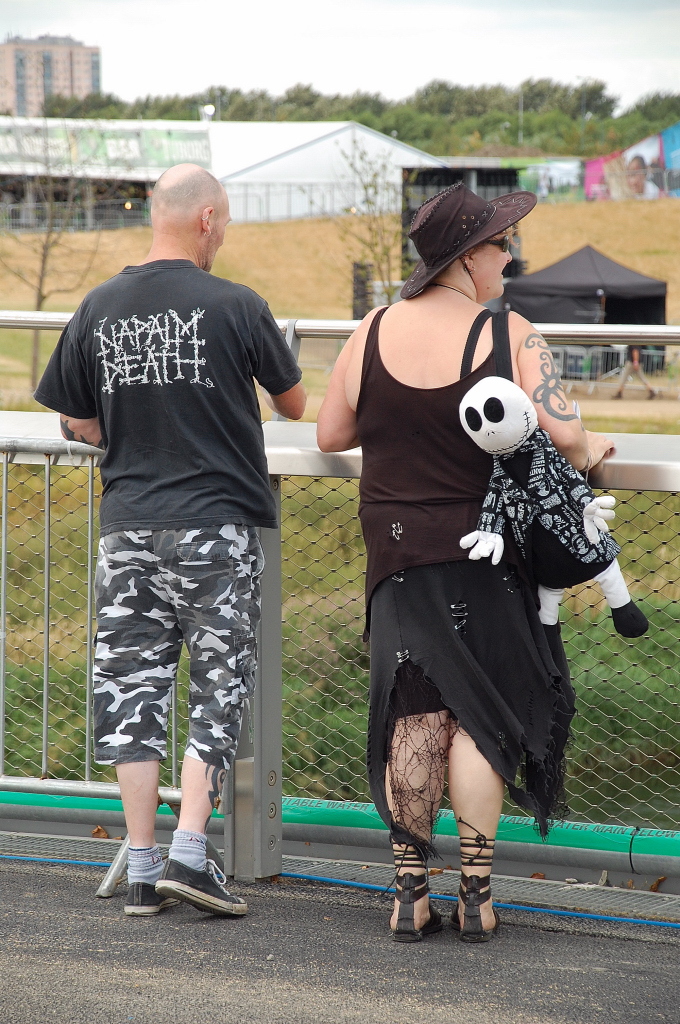 Some of the people we saw at the Festival 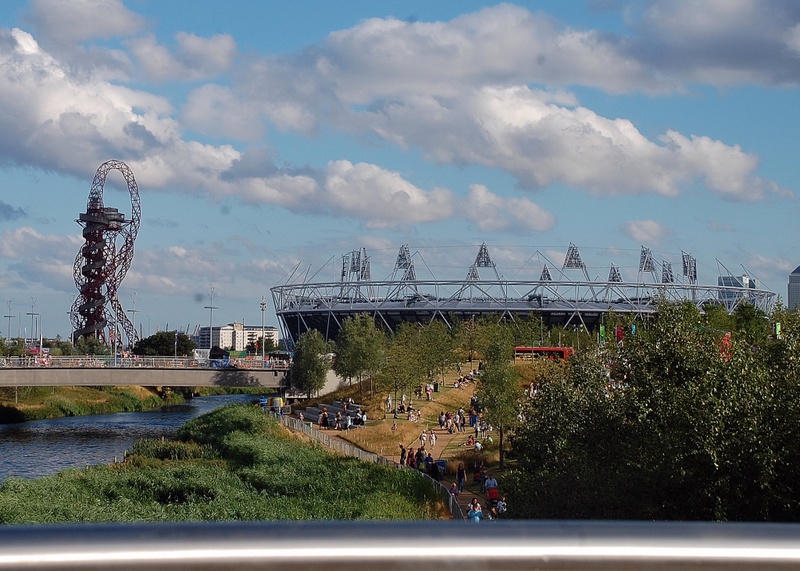 Iconic view of the Stadium from the North Bridge 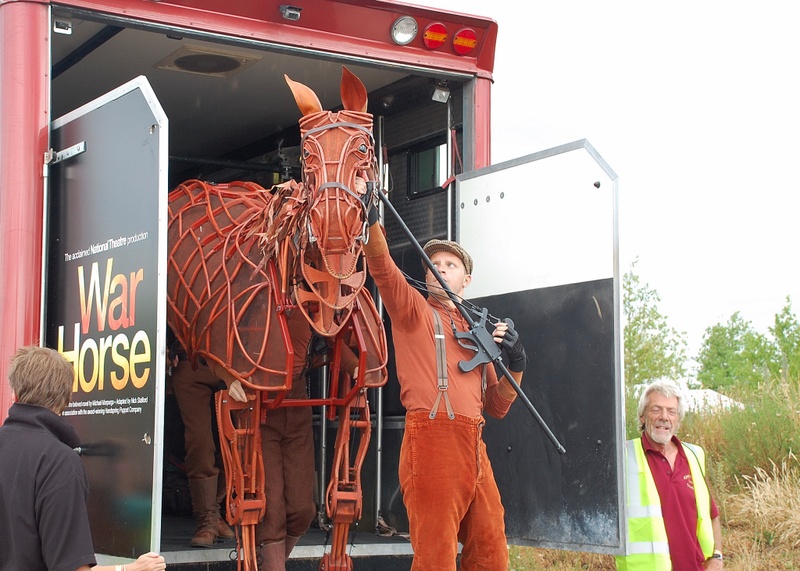 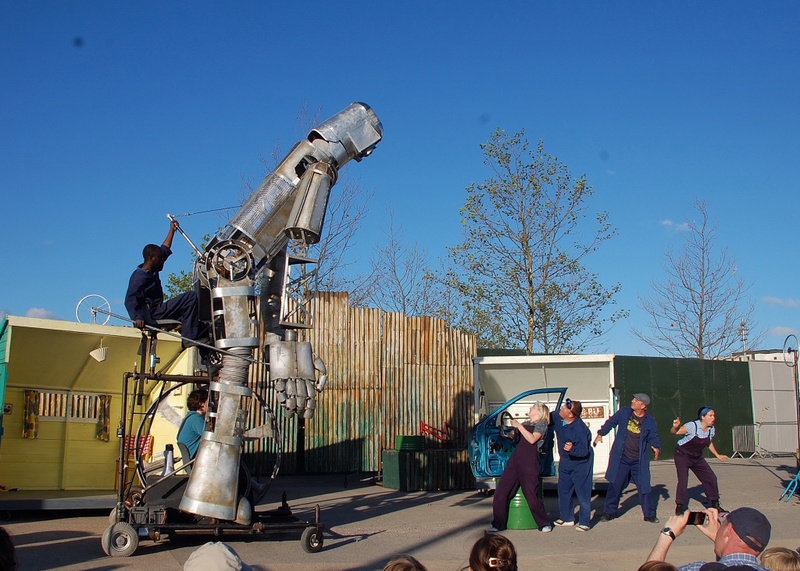 There's a much longer review of the Festival here - courtesy of the "Daily Telegraph."

On the jobs front, BT are converting the old press centre into TV studios, and as far as homes are concerned apartments in the former Olympic Village will be offered for sale this Autumn. Will these flats be affordable for local people? Prices haven't been announced yet but I have to say that I doubt it. I'll report back when I get more information.

Well, This was always going to be a tall order. Up to half a million people with disabilities are likely to lose financial support as a result of the replacement of Disability Living Allowance (DLA) with Personal Independence Payments (PIP). Dame Tanni Grey-Thompson, writing in the Daily Telegraph, stated that these people are " now at risk of being unable to get the social care support they need to do the basic things in life. What is at stake here is the independence of hundreds of thousands of disabled people." You can read Tanni's full article here.

My current score is 2.75 - I think that para sporting events will continue to be high profile vents, I'm encouraged about the future of the Olympic park site but concerned about the cost of housing, and desperately concerned about the place of people with disabilities in British society as a whole.

Both sets of games are over, the athletes are currently taking part in the parade through Central London, and the whole nation feels good about itself. It appreciated the generous spirit and hospitality of over 70,000 volunteer games makers, it marvelled at the spectacle of the opening and closing ceremonies and above all it loved to watch athletes from all over the world doing extraordinary things that the vast majority of are just not capable of.

How long before us Londoners go back to being our moody taciturn selves? I hope it's a long time before we forget how to smile at each other.

I'd like to say a few words about the legacy of both sets of games, but concentrating mainly on the Paralympic legacy. There are just three things that I think MUST happen:

The Paralympics: Rio must continue what London began.

I don't think that any of us would have foreseen that the paralympians would play to packed houses in every session, or that over 6 million viewers would watch the Paralympics on Channel 4 on the night that David Weir, Hannah Cockroft and Jonny Peacock all won gold medals. Most of the TV audience and many of the spectators who saw events at the venues probably had never had any contact with disabled people before, and they didn't see the athletes as disabled - just as sportsmen and sportswomen taking part in familiar events such as swimming and long jump and unfamiliar events such as wheelchair rugby and boccia.

London 2012 was the first time ever that the Paralympics received the same level of media attention as the Olympics, and the first time that all seats were sold out. However, not every country gave them the same level of coverage that we saw in the UK. In the USA, not one minute of the games was broadcast live. NBC has scheduled only four hour-long highlights programmes on its Sports channel, followed by one 90-minute round-up. And the highlights won't even be broadcast until October.

In France the only broadcaster that planned to cover the games live was TV8 Mont Blanc, a regional channel that is only available to 70% of the population. The state broadcaster France Television, which aired around 16 hours a day of Olympic coverage, earning record viewing numbers only planned to air a brief highlights show late in the evening. But when an online petition demanding greater coverage garnered 17,000 signatures in a matter of days, the company buckled under the pressure and agreed to schedule a one-hour show in a primetime slot.

So I just hope that the Paralympics didn't "peak" in London, and that Rio can find a way of showing more people just how thrilling and moving disabled sports can be.

The London 2012 competitors showed just how much people with disabilities can achieve. There biggest irony is of course that both sets of games were sponsored by Atos, the outsourcing contractor who is using flawed and cruel tests to deprive many thousands of disabled people of benefits on which they rely. The second irony was seeing government ministers, always quick to encourage the right-wing press to demonise people with disabilities as "scroungers" being equally quick to associate themselves with success by presenting medals.

I wonder what the press coverage will be when one of our paralympians loses his or her mobility allowance when Atos starts testing them for the new Personal Independence Payment scheme that is to replace Disability Living Allowance. Remember that the purpose of replacing DLA with PIP is to cut the cost by 20%.

The Olympic park legacy must be to provide homes, jobs and recreation for the people of East London.

Work starts almost immediately to turn the complex of arenas, pools and buildings which have become so familiar into the newly-named Queen Elizabeth Olympic Park. The new-look park is set to re-open to the public in phases from July 27 next year.

The new Park will include 257 acres of open space, 6.5 km of waterways, the Orbit sculpture and observation tower, and five world-class sports venues. It is expected to host over 2,000 events each year including an annual festival of disability sport which will be one of the first events in the new park next July.

Outside the public park, there are plan to build homes 8,000 homes in five new neighbourhoods and to create 8,000 jobs in a new commercial district north-west of the park centred around the Press Centre and Broadcast Centre.

Well, those are the plans anyway. But long-term regeneration is a hard slog, and at the moment the London 2012 organisers have still to find tenants for the Stadium, the Press Centre and the Broadcast Centre. We are a nation that doesn't build remotely enough homes for our expanding population, and there has to be a lot of doubt as to whether local people will be able to afford the new homes. Let's just hope they get the balance right - it might take a long time. If you remember it took seven years for what was the Millennium Dome to re-open as the O2 Arena.

So, when some of these things take longer than we expected, we'll be able to find plenty of reasons to g back to being our traditional grumpy selves. In the meantime, have smile from me.