Charles Dickens first published A Christmas Carol in 1843 and since then his name has been indelibly associated with Christmas. This novel is credited by historians with reconstructing Christmas as a family centred festival of generosity.

Every Christmas when I was a kid the Harrods van would turn up at our doorstep on the council estate where we lived in Edmonton. That was unusual, I doubt if any other doorsteps on the estate got such a delivery. On the van there were always three parcels for our family; a Christmas cake and a bottle of whisky for my Mum and Dad and a book, usually a Dickens volume, for me. The book was always inscribed in what is now to me obviously an old person's handwriting:

Mr Street was my Dad Charlie's pen friend and they'd been writing to each other for over thirty years by the time I was eleven in 1959. Charlie was then just over fifty, but Mr Street was then in his nineties.

Charlie was a working class boy from Edmonton who worked on an assembly line and Mr Street was a public school and Cambridge educated man who had been a successful barrister. We lived in a London council house, but Mr Street lived in a Surrey mansion that had servants quarters, and he still employed servants up to his death. I have no idea whether he ever married or had children, but I suspect he hadn't.

The original reason My Dad and Mr Street had started to write to each other in the late 1920s was because when Charlie was three he had caught the polio virus which left him disabled in both legs and his left arm. This meant that as an adult, before the birth of the NHS, he had to buy crutches, leg irons and wheelchairs and he - as well as countless others like him - didn't have the money to do so.

The Shaftesbury Society - a Christian charity - used to provide people like Charlie with a list of potential wealthy benefactors to whom they could write and ask for assistance, and Dad was given Mr Street's name. In other words they had to write begging letters. But Mr Street gave him financial support for about twenty years until the birth of the NHS meant that it was no longer needed. But these two men from such different backgrounds had become friends. They now wrote to each other as equals.

When Charlie married Kathy - another polio survivor - in 1945, Mr Street was an honoured wedding guest. His wedding present was an art deco seven day clock by Heal's that sat on the mantelpiece in our living room. When I was born in 1948 he sent me a christening present, and he sent me books every year until he died in the early 1960s. I must have met him when I was very small, but I have no memory of it. I do remember my Dad reading the letters from his pen friend and writing back, and the fact that Charlie's letters always began "Dear Mr Street" while the return letters always began "My Dear Bradford". I suppose that's how you were taught to write a personal letter at public school in the 1890s. I also remember having to write him a thank you letter for his Christmas gifts. It wasn't something that my eleven year-old self did very willingly of course.

I still have seven volumes of the Dickens books that Mr Street gave to me - I could never think of giving them away, but the book I really value most of all is my copy of "Treasure Island". It's probably the book that gave me a lifelong love of literature. It's inscribed "Andrew - from Mr Street -Easter 1955." So he must have thought of us at Easter as well as Christmas and birthdays. 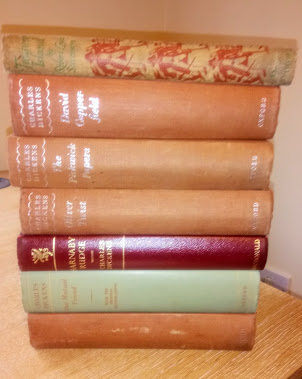 How appropriate that so many of his books were by Dickens. Prior to the publication of A Christmas Carol most families simply celebrated Christmas by going to church. They didn't give gifts to each other, and they didn't see it as a reason for giving to Charity. But by the spring of 1844, The Gentleman's Magazine attributed a sudden burst of charitable giving in Britain to Dickens's novel; in 1874, Robert Louis Stevenson waxed enthusiastic after reading Dickens's Christmas books and vowed to give generously. In America in 1867, a Mr. Fairbanks attended a reading on Christmas Eve in Boston, and was so moved he closed his factory on Christmas Day and sent every employee a turkey.

So let's remember just how much Charles Dickens has influenced the way we celebrate Christmas, and I'll also remember the way he influenced the remarkable Mr J G Street.

Let's also remember that the period that I'm recalling - the 1950s and 60s - was in some ways a golden age for people whose disabilities meant that they needed to use expensive mobility aids such as wheelchairs and mobility vehicles. Quite simply, these were just supplied by the state - the user never entered into a financial transaction. It is of course true that the equipment the state supplied was very basic; there was little choice and little innovation, but the commitment to supply these products rendered the generosity of people like Mr Street redundant. But his friendship was never redundant, even twenty years later.

Today, the state provides cash to people with disabilities in the form of Personal Independence Payments , and it is out of these cash payments that the users are expected to purchase their own mobility aids. It is true, that this form of support provides users with choices about what aids they purchase and from whom they purchase them, and it is also true that this encourages more innovation. However, for many people PIP payments do not provide sufficient funds to purchase what the user needs; assuming of course that they can jump the significant hurdles to qualify for this assistance in the first place

On Facebook today you can see crowdfunding appeals to provide wheelchairs and other mobility aids. These are the twenty first century's equivalent of the begging letters of the 1930s and they are being responded to by a new generation of Mr Streets.